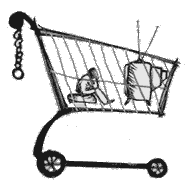 A law is impossible to violate — think gravity or death.

Everything else is a pragmatic recommendation: it is better for our genes' perpetuation to not rob or kill other Us.

How do we tell Us from Them?

Let's say that we all need calories.

In order to take more than we need, we have to separate Us from Them and only take from Them.

An alternative way to draw this line is "everyone alive vs others".

The choice between these two alternatives determines our approach to the calorie distribution:

I could stop right here: the middle IS supposed to be strong, to contain ~70% of observations.

What makes us all Us for the second alternative?

We are all born alone, scared, and powerless.

We are all characters in a script that we know neither the purpose nor the rules of — except a few laws like "no time travel" and "must sleep regularly".

Skinless, we are all remarkably similar.

We all die alone, scared, and powerless.

You may say "This is all because you never knew the taste of power and money, and you are not too smart. Otherwise you'd never want it otherwise."

I have no empathy, but I am wicked smart.

I believe that whatever my lawyers call mine, is mine.

I KNOW that all the excess stuff I have is someone's essentials, because I am wicked smart.

I KNOW that I am turning the world into a toxic slum, because I am wicked smart.

My whims are everyone's orders.

I believe that anyone could accomplish whatever I accomplished, if only they wanted to.

I cannot step outside of my guarded fortress, because (a) the world outside is essentially destroyed by yours truly, and (b) those who still survive out there may want to hurt me.

What is the point of such existence? Where's fun in it?

The only way to enjoy it is if I get my kicks out of others' misery.

In which case I must be profoundly, terminally sick.

If sick members of the species prosper at the expense of the healthy, then the species goes extinct.

Entire species, not just I.

This is why the ecstatic admiration of the so-called "successful" severe outliers is a death sentence to humanity.

If we are in it together, as talking heads insist decade after decade, then these outliers would be impossible, let alone their mainstream admiration.

Yet here we are. Instead of the global Us, we are stapped to passenger seats in a car that sick people with no feelings are consciously driving off a cliff.

What can be done about this?

Act as if we already are in this fork of the future where we are all Us.

Do stuff because it's right, not because it pays well. Don't take what you can survive without.

If you die alone because of your choices — well, you were going to die alone anyway.

If in the end your actions don't seem to have made a difference, you still did what you felt was right, you know it, and it is infinitely better than the alternative.

Others will come and keep chipping away at the narrow mindset of greed, competition, and hatred.

They are chipping away at it right now. Don't try to join forces, because organizations are easy to subvert. Act as if everything already makes sense, as if everyone digs the global Us.

Don't look for someone to lead you, to permit, to tell you when and where to be you.

Ignore everything above and live, live now — because this may be your last moment.